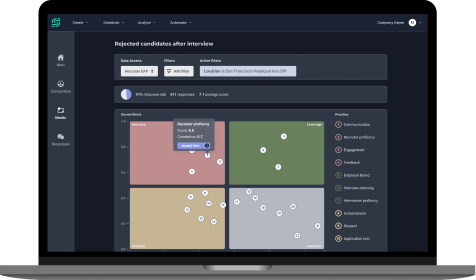 Starred is a SaaS feedback company that is focussed on the recruitment market. They have a solution where users can create, distribute and analyze feedback, built upon an automation hub where users can automatically distribute surveys. Starred has about 400 customers, ranging from well-known corporate like Coca Cola to up and coming startups like Brex.

The challenge Starred had was dashboarding. Their previous dashboard was made more than 6 years ago and had a lot of legacy, both from a technical as well as a functional perspective. They had had a stint with a new dashboard, which had been unsuccessful. They needed one new dashboard suite where all their users need could be met.

Since Starred had already gone through a new, unsuccessfull iteration of the dashboards my first action was to organise a retrospective workshop. This workshop had three simple question for both the legacy dashboard and the recent iteration:

With stakeholders from every corner of the business, this was a very interesting starting point. It turned out both dashboards had things that were liked that the other dashboard didn't have.

After this I started talking to users about the dashboards. I spoke with almost 10 users from 8 different companies. The best revelation I had was that the insights someone should see were dependant on the function or role. A recruiter should not see the same things that a team manager should see, and vice versa. This was so interesting, especially because the previous dashboards were not build that way; in most cases every user would see the same insights.

Armed with these insights, I drafted a first information architecture sketch. Together with the insights from my user interviews, I presented these to the management team. During the discussion, we agreed upon three different dashboards for the new dashboard suite:

I started working on prototypes for these dashboards. Below you'll see my work for the survey dashboard. I used these low-fidelity prototypes to demo to stakeholders and get feedback.

To come up with a consistent styling, I came up with a component system for dashboard styling. It consisted of rules, patterns and generic components that are the building blocks for this and future dashboards.

I’d love to talk about your design challenges. Reach out to me and happy to discuss anything.
Contact me